JEA strongly supports a reliable electric grid and a healthy wholesale market to facilitate quality services to the communities we serve. Compliance with laws, regulations, industry standards, codes of conduct, and ethics are an integral part of JEA’s corporate culture and goals. In addition, failure to comply may result in legal or regulatory sanctions, financial losses, and significant reputational damage. As a JEA customer, we want you to understand how you, the JEA customer, benefit from our compliance with these Standards.

In 1965, the Northeast Blackout happened on a chilly evening in November when the demand for power was high. This blackout was caused by a protective relay that triggered a cascading failure, resulting in a loss of power in seven U.S. states and Ontario, Canada. It affected 30 million people for 12 hours, and covered 80,000 square miles of the Northeastern United States. This outage was the first indication of how interconnections between utilities can add significant risks to the stability of the Bulk Power System.

The North American Electric Reliability Corporation (NERC) was founded in 1968 by representatives of the electric utility industry, for the purpose of developing and promoting voluntary compliance with rules and protocols for the reliable operation of the bulk power electric transmission systems of North America.

The 2003 Northeast Blackout took place on a hot August day. It was a cascading power failure that affected 40 million people in eight Northeastern states and 10 million people in Ontario, Canada. The blackout was primarily caused by two events. The first event happened when highly loaded transmission lines sagging from the summer heat came into contact with overgrown trees. The second event happened when the Energy Management System (EMS) failed to notify operators about overload conditions on the transmission system near the epicenter of the outage at a Midwest utility.

In 2006, FERC awarded NERC the position of Electric Reliability Organization (ERO). This gave NERC the authority to: develop standards for power system operation; monitor and enforce compliance with those standards; assess resource adequacy; ensure that power system operators remain qualified by requiring job-related education and training; and investigate and analyze causes of significant power system disturbances in order to help prevent future events. Shortly after NERC was named the ERO, it filed the first set of mandatory and enforceable Reliability Standards.

NERC Reliability Standards define the reliability requirements for planning and operating the North American Bulk Power System and are developed using a results-based approach that focuses on performance, risk management, and entity capabilities.

On June 18, 2007, compliance with NERC Reliability Standards became mandatory for U.S. users, owners and operators of the Bulk Power System. Entities that violate any Reliability Standard by not performing a function as defined by a requirement, under federal law, face enforcement actions by NERC. FERC, NERC, and regional reliability entities monitor and enforce compliance. Any entity found non-compliant may be subject to fines of up to $1 million per day per violation.

NERC defines the Bulk Power System as the power generation facilities combined with the high-voltage transmission system, which together create and transport electricity around North America. Put another way, the Bulk Power System is the continent’s electricity system except for the local electricity facilities you see in your town or city. NERC does not deliver power directly to homes and businesses. That service generally is provided by a local utility of some kind. Local delivery is under the jurisdiction of state, provincial or local utility regulatory agencies.

NERC defines a reliable Bulk Power System as one that is able to meet the electricity needs of end-use customers even when unexpected equipment failures or other factors reduce the amount of available electricity. NERC divides reliability into two categories: 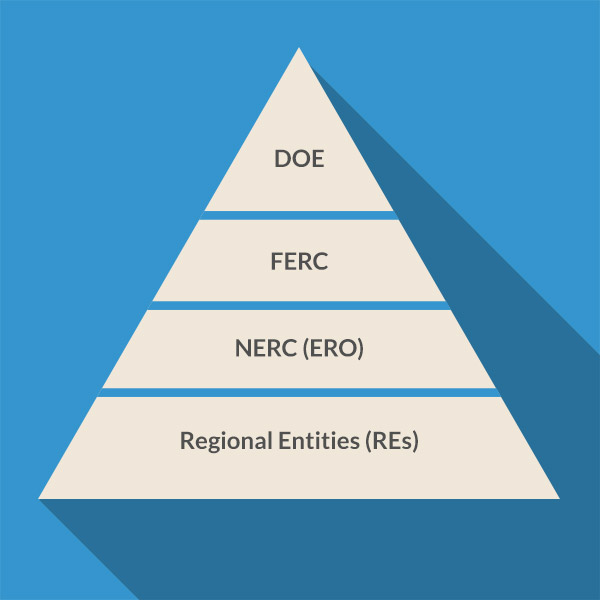 The DOE is a federal agency that is responsible for United States energy policy. The DOE is led by the Secretary of Energy who is appointed by the President of the United States.

FERC is a federal agency that regulates the interstate transmission of electricity, natural gas and oil. FERC collaborates with DOE on several energy policies and oversees NERC as the ERO under the Energy Policy Act of 2005 in the United States, as do provincial governments in Canada and part of Mexico. FERC is led by 5 commissioners whom are appointed by the President of the United States.

NERC’s mission is to improve the reliability and security of the Bulk Power System in the United States, Canada and part of Mexico. The organization aims to do that not only by enforcing compliance with mandatory Reliability Standards, but also by acting as a catalyst for positive change—including shedding light on system weaknesses, helping industry participants operate and plan to the highest possible level, and communicating lessons learned throughout the industry.

NERC, as the ERO, develops and enforces Reliability Standards; monitors the Bulk Power System; assesses adequacy annually via a 10-year forecast and winter and summer forecasts; audits owners, operators and users for preparedness; and educates and trains industry personnel. NERC is led by a President and Chief Executive Officer appointed by NERC’s Board of Trustees. NERC is governed by an eleven-member independent Board of Trustees.

SERC, a Regional Entity (RE)

JEA’s control area resides in the SERC region. The regional entities, such as SERC, are interconnected groups overseen by NERC through Regional Delegation Agreements. The regional entities are authorized by NERC to: develop stringent regional standards; monitor compliance with NERC and regional standards; and impose enforcement actions. These entities also forecast electricity demand, coordinate operations, share information and develop emergency recovery plans. The Regional Entities are led by a President and CEO appointed by the Region’s Board of Directors.

Compliance monitoring is defined by NERC as the process used to assess, investigate, evaluate, and audit in order to measure compliance with the NERC Reliability Standards. To maintain a culture of compliance, regular activities of varied type and duration are employed by JEA. These include, but are not limited to:

Compliance is very involved, and JEA is regularly audited and required to submit information. At the beginning of each year, JEA has to self-certify that we were compliant with the Standards for the previous year. During the year, SERC may perform spot check audits on a small sample of Standards. JEA also has an onsite audit every three years where SERC examines evidence of documentation and processes on the Standards to ensure compliance.  In addition to these audits, JEA is required to do monthly and quarterly reporting on certain Standards. Other Standards require reporting when certain events occurs.

JEA is also responsible for operating elements of the power grid that are considered part of critical infrastructure. These systems have to comply with multiple compliance program requirements and the NERC reliability cyber security standards commonly referred as the Critical Infrastructure Protection (CIP) Standards. CIP Standards are very complex and due to frequent changes to the cyber security environment, often very difficult to implement. They are also the most violated NERC Reliability Standards.

These Standards define the security requirements and some of the common security practices including information security, firewall protection, vulnerability patching, access control, system monitoring and logging and malware protection. Background checks and training are mandatory for all individuals authorized to maintain and administer these systems.

Suspicious Activity: If You See Something, Say Something

Suspicious activity refers to, but is not limited to, any observed activity, behavior(s), or conditions regarding a vessel or pleasure craft, marine structure, waterfront facility, person, vehicle, cargo or stores, which a reasonably prudent person would consider out of the ordinary or unusual for the environment in which the activity occurs. Suspicious activity may include:

All signs of suspicious activity or sabotage should be reported to JEA immediately. Keep your eye out for:

If you observe any of the above, do not attempt to intervene.

If you have any questions related to compliance with NERC Reliability Standards, please contact us.