This project has been completed. Below is the information that was provided to customers prior to the project start date.

JEA has completed the rehabilitation of the 54” sewer line as of March 1, 2016. JEA has been working over the past few weeks to return the project area to its pre-construction condition. The final paving of Hogan Street from Water Street to the end of the cul-de-sac will take place from April 12-13, 2016.

Check out articles written by local news sources about the project:

JEA has completed construction to rehabilitate an existing 54-inch sanitary sewer trunk line that has reached the end of its service life. This sewer line is a vital piece of JEA’s sewer infrastructure that serves a large portion of downtown Jacksonville and The Jacksonville Landing.

JEA upgraded the old sewer line with a trenchless lining technology that allows for the rehabilitation of the existing pipe without having to dig up city streets, or in this case, The Jacksonville Landing’s walkways and courtyard. This technology also greatly reduces the amount of time it would take to complete a similar project using traditional construction methods.

The North bank Riverwalk was reopened as of March 1, 2016.

The boat docks have been reopened as of March 1, 2016. Any questions regarding future dock closures should be referred to the City of Jacksonville (630-CITY).  The River Taxi has returned to normal operations.

In order to complete the lining process, JEA had to remove the contents of the pipe (sewage) while the old pipe was cleaned and the new pipe lining was installed. To do this, JEA was required to install a temporary, above ground by-pass piping system to divert the gravity sewer during the lining process. This enclosed piping system included a 24-inch fused pipe that was constructed and run along the Northbank Riverwalk in front of The Jacksonville Landing from Hogan Street to a manhole located in the Jacksonville Landing parking lot. JEA installed temporary mats to protect the decorative bricks along the Riverwalk.

To learn more about the pipe lining process, check out our video below: 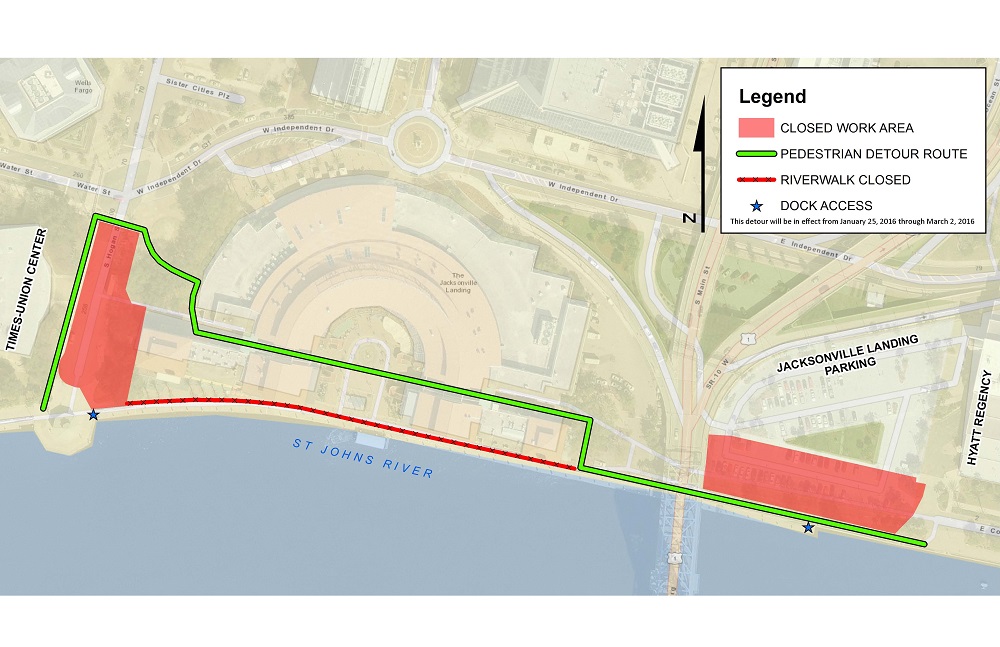