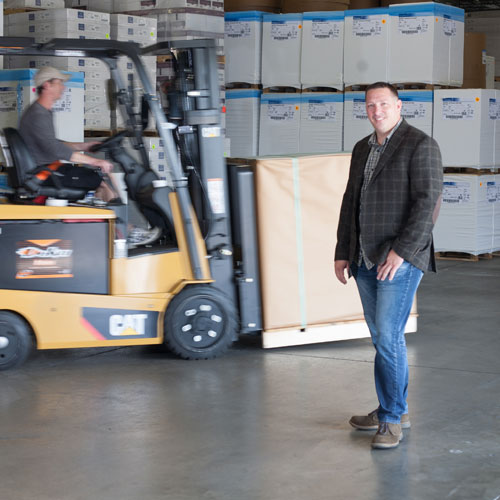 As the general manager of a third party logistics company, Wagner Logistics, Chad Wakeham had been thinking about upgrading his entire fleet of propane forklifts for a while. The forklifts, which are used to load and unload truck trailers full of products, brought more surprising benefits than Wakeham originally expected!

Have you considered switching to electric equipment for your home or business? Learn more about Electrification.

“We have one customer who is very green,” Wakeham said. “And we decided to go ahead and electrify our fleet to better our relationship with them.”

In February 2015, Wakeham moved out his old propane forklifts and moved in six electric-powered ones made by Caterpillar. “It was about the same as buying a very nice house,” he said with an ironic laugh.

Wakeham was able to take advantage of a JEA InvestSmart incentive that gave him a rebate for buying the electric forklifts. “We were happy to get it,” he said. “There were a lot of charges like dock fees that we weren’t anticipating. The rebate money helped pay for those things.”

Something else Wakeham wasn’t anticipating? His warehouse is cleaner because of the electric forklifts.

“We took out the dust and the engine burn and the tires spinning on the ground caused by the propane forklifts,” he said. “And because of that, I don’t need to purchase a commercial sweeper/scrubber to clean the concrete floors in our warehouses.”