In April 2016, JEA's Journeyman team of Robert, Clay and Brian (seen below) traveled to Minneapolis, Minnesota to compete in the APPA's Public Power Lineworkers Rodeo and came home National Champions.  They beat 66 journeymen teams from 60 utilities in five categories:  Hurt Man Rescue, Crossarm Change Out, Insulator Change Out, Transformer Change Out and Insulated Jumper Change Out.  Their times and near-perfect scores in high winds and freezing temperatures resulted in their first place, National Championship win. 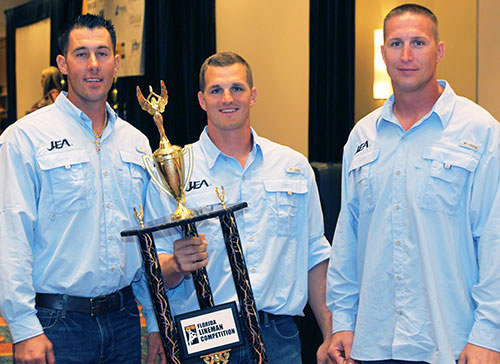 In addition to the competition, the safety and training conference is designed to expand the industry’s commitment to promote safe work practices that help improve the safe performance of line work around the world. The participants placed as follows:

This competition was one for the history books. JEA took TOP honors in 2013 and brought home the World Championship Trophy, a feat not easily duplicated.

On April 20, 2013 in Downtown Jacksonville, more than 100 lineworkers from across the state stepped out of their utility trucks and trailers to compete in the 13th Annual Florida Lineman Competition.